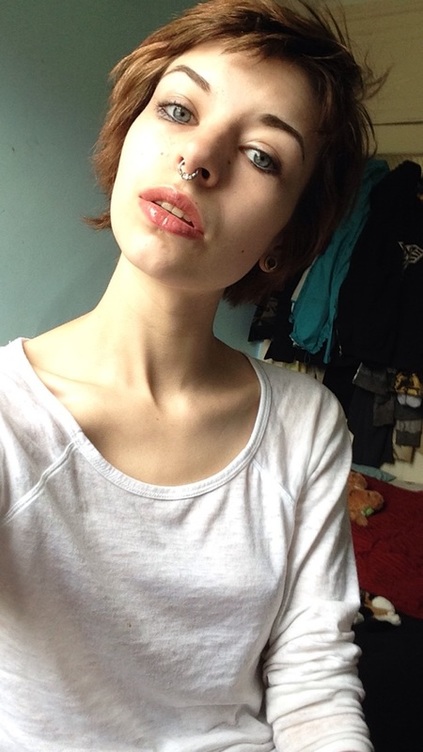 Occasionally a television show elevates the label of “reality” because, instead of showcasing bachelorettes mewling feminism back fifty years, it has a real purpose. Sundance’s “Dream School” is one such show, which wrapped up its second season this year. I was so moved by student Scout Cook’s spoken word performance about an abusive relationship — and how she seemed to find catharsis through art — that I reached out to interview her.

“Dream School” gives students who have had difficulty in regular school for various reasons the opportunity of a lifetime to study with Chuck D, David Chang, Johnny Weir, and Gloria Allred, to name a few. Cook had intense anxiety that prompted her dropping out from high school in Williamsburg, Brooklyn.

I ask Cook how the overall experience of being on “Dream School” was. “My best friend’s mom saw some information for the interviews they were holding to find students that fit the mold for the show and, knowing my story, sent it my mom’s way,” she says. “I didn’t want to do it for a little bit, I was kind of scared of opening up and I was scared that I’d quit early and look idiotic on national television, but I ended up doing it because I wanted to share my story and let others know that they weren’t alone. I try not to think of the experience as the aired footage, because that’s just the product of what happened and it doesn’t tell the whole truth, or even show the best times. I loved being on Dream School and I miss it so much! It was a lot of ‘hurry up and wait,’ but everyone working on the show was awesome, and even if the food was bad, we all had to power through it together. There was also a lack of the toxicity of normal high school environments. No one there was going to judge you for the things we opened up about to each other. It was safe. I miss that community and environment (and free food).”

Cook is nineteen and has grounded plans: “At the moment,” she says, “I’m trying to focus on both self-producing my music and getting into community college upstate. I need to get away from the toxicity of the city and how triggering it can be for me so I can grow a bit more as a person and an artist.”

“I’ve started meeting all kinds of people who are incredibly kind and supportive of me just because I’m telling my story,” Cook says. “I try to do the same, because everyone deserves a friend who believes in them when they feel hopeless.”

As someone who’s also had anxiety and fights it to be an artist and express myself in the world I was compelled to reach out to Cook. I ask her to tell me a bit about that process of writing/performing the spoken word piece that inspired me to interview her.

"When we first got to The Collective (where we wrote our poems), Malcolm [Wicks] performed a few of his pieces for us," Cook says. "After his piece about education, they asked us to take a part of his spoken word and flow off of it on our own. They gave us some time to do it, but as soon as they gave us the assignment, I already knew that I was going to take his line about being viewed as broken and work off of that. There are some moments in a flow of creativity when you can just continuously write everything in a way that comes out perfectly and flows beautifully, and that spoken word was just one of those moments. At that point, I had only really recently begun to be so open about my experience, and opening up to this room of total strangers was kind of cathartic. Performing it at the poetry slam in front of my parents and boyfriend was way scarier than performing it in front of the other students, though. They knew the story and understood the references I made in my piece, so it was really opening up to them about what it felt like, even 2 years after."

I ask if she feels like that performance paved the way for more creativity/art to flow.

"I feel like Dream School in general did that for me," says Cook. "I was writing just as much before, but 'Dream School' gave me the opportunity to thrive in an environment that promoted me following my dreams and being who I wanted to be without restraints."

I ask Cook about her SoundCloud page, where she posts her music, and if she is still writing and performing and if she has plans to continue in the future.

"I never stop writing!!" she says. "I went through a writers block for a few months, but have still forced myself to write at least one piece of poetry or at least one song a day, even if I think it’s terrible. I want to be able to write my entire life, and perform my creations so that I can communicate and connect with other people. As for my SoundCloud, I’m actually about to delete my original page and start up a new one under “real-wastedyouth” (since that’s what I feel like when I dig deep and get to the place where I write the pieces I’m proud of)."

I know as a fellow creative woman who has had a few bad relationships being treated well has become more and more of a priority as I’ve gotten older. I read somewhere that the abusive guy with whom Cook had the relationship about which she wrote the performance piece was trying to say she was slandering him by speaking about her experience. This is another reason I wanted to interview her — it sounds so familiar. I ask if she knows that’s BS and what that experience was like.

"I know it’s TOTAL B.S.," she says. "The story to that is actually that he and I had a mutual friend (that he was much closer with than I was) who passed away at the end of September. He hit me up asking if he could call me, I felt bad and said yes because I knew what he was going through, even though it probably wasn’t the best idea for me. He ended up apologizing, really apologizing, for the first time. Owning up to how terrible he was to me, sounding genuine in his guilt, in the way that I’d always wanted him to. He followed it up by asking if I 'slandered his name or ruined his reputation' any more than I already had, totally invalidating his apology because he really only cared about me not being upset at him and saving his own ass. In December, he called me and went off at me (and then had his girlfriend go off at me via text message) for talking about him on the show. I have to kind of remind myself daily that he can’t hurt me anymore and that the more I talk about it, the less power he holds over me and the weaker he is as a person because more people will know about what he did and how he’s dealing with it."

I tell Cook I read that Adele’s ex wanted her to pay him royalties because so many of her songs were written about the pain of their breakup.

"I heard about that! Terrible people usually continue being terrible, so I try to distance myself from them as much as possible," she says.

Cook's “Dream School” valedictorian speech was great. But unfortunately they cut it from the show, however. I wonder if that still stings?

"I was so upset about that!!! I’m not angry or salty about it, and I was never REALLY hurt by it, but I was a little bit bummed that I worked really hard on the show and they didn’t show a lot of it. Especially because my speech was LITERALLY made-for-TV."

I ask her what she got out of doing "Dream School."

"I got a lot of motivation out of it," she says. "'Dream School' helped me stop doing nothing at home all day, too anxious to go out and see the real world. They gave me hope and faith in myself, that I could do anything, especially with their support. They gave me an AMAZING mentor (John-Michael Parker of the band Great Caesar), whom I love and whose music inspires me to no end. They gave me a group of friends that I know I’ll be close with for years, if not for life. They reminded me how smart I am and how talented I am and that I did the right thing when I told my guidance counselors about my abuser, even if I ended up dropping out because of it."

I ask Cook about her plans for the future.

"I’ve got most of it figured out in theory," she says, "but the main goal is to become some sort of rockstar and also have three really cute kids. For the immediate future? Get into a comm college and get my home studio set up."

Her current creative obsession is "Listening to indie instrumentals on Spotify and writing lyrics to them. When I’m my most blocked, that helps out a lot," Cook says.

She adds: “I feel like I always need to promote feminism whenever I can, so yeah! Feminism is great and needs to stop being demonized. Also a note to anyone reading this — Love yourself. You’re a beautiful human vessel and you deserve love.”

A shorter version of this piece appears here, in the Newport Mercury. And you can share the love by commenting on the interview here, on my blog.